Situated on the second floor of the luxurious Langham hotel in an iconic skyscraper designed by Ludwig Mies van der Rohe that once housed IBM regional headquarters, Travelle is located along the Chicago River in the heart of downtown Chicago. A play on the word travel, Travelle is a casually elegant restaurant, lounge, and bar featuring Seasonal American cuisine. Dishes feature ingredients sourced from around the country, utilizing a connection with some of the finest farms, ranches, and orchards in the nation.

Alongside a carefully curated 1600-bottle wine list, Travelle boasts a beverage program that highlights skillfully crafted classic cocktails. Influenced by the romance of the digital age, architect/designer David Rockwell of the Rockwell Group creates a modern environment that conveys history, sophistication, and nostalgia into the 124-seat restaurant and 81-seat bar and lounge that overlook the Chicago skyline and river. 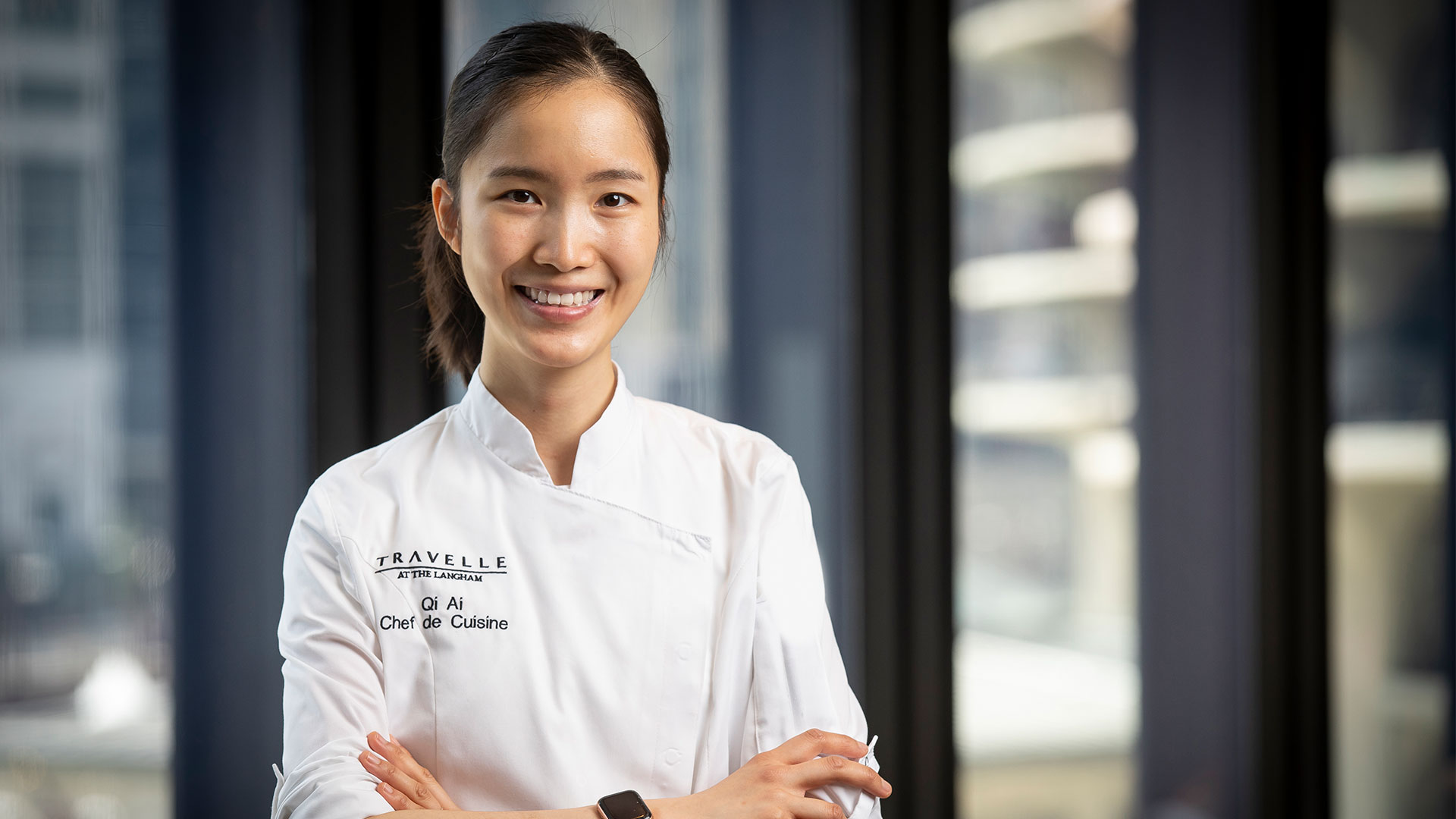 Born and raised in Beijing, Qi acquired a B.A. in Chinese Language and Literature at Peking University. After graduation, she moved to Chicago to pursue her culinary passion and earned her A.A.S. in Culinary Arts at Kendall College. Prior to joining the Travelle at The Langham team, Ai spent time in the kitchens of the highly regarded Chicago restaurants Acadia, Sixteen, and Boka. In 2015, she was a National Finalist of San Pellegrino’s “Almost Famous Chef” Competition.

“I started my career working for some of Chicago’s highly acclaimed chefs,” she says. “I have witnessed the kitchen discipline, the dedication to the craft, the persistency. When I create a new dish, I try to look at the timeless, classical dishes and flavor pairings, then work with seasonality and gorgeous presentation while showcasing intriguing flavors and unique textures.”

Classically trained in French cuisine, Ai mastered many cuisines, drawing inspiration from her memories of cooking back in Beijing. Her love of food blossomed at an early age as she helped her grandmother prepare meals in her kitchen. Ai’s parents were also skilled at cooking, and she often helped create and modify an array of different recipes as a child.

“Hospitality for me is creating unforgettable memories,” Ai says. “I want to take my guests on a journey of the world with me to experience tastes from every culture made with local and seasonal ingredients. I strive to create lasting memories and flavors that will keep bringing our guests back to dine with us.” 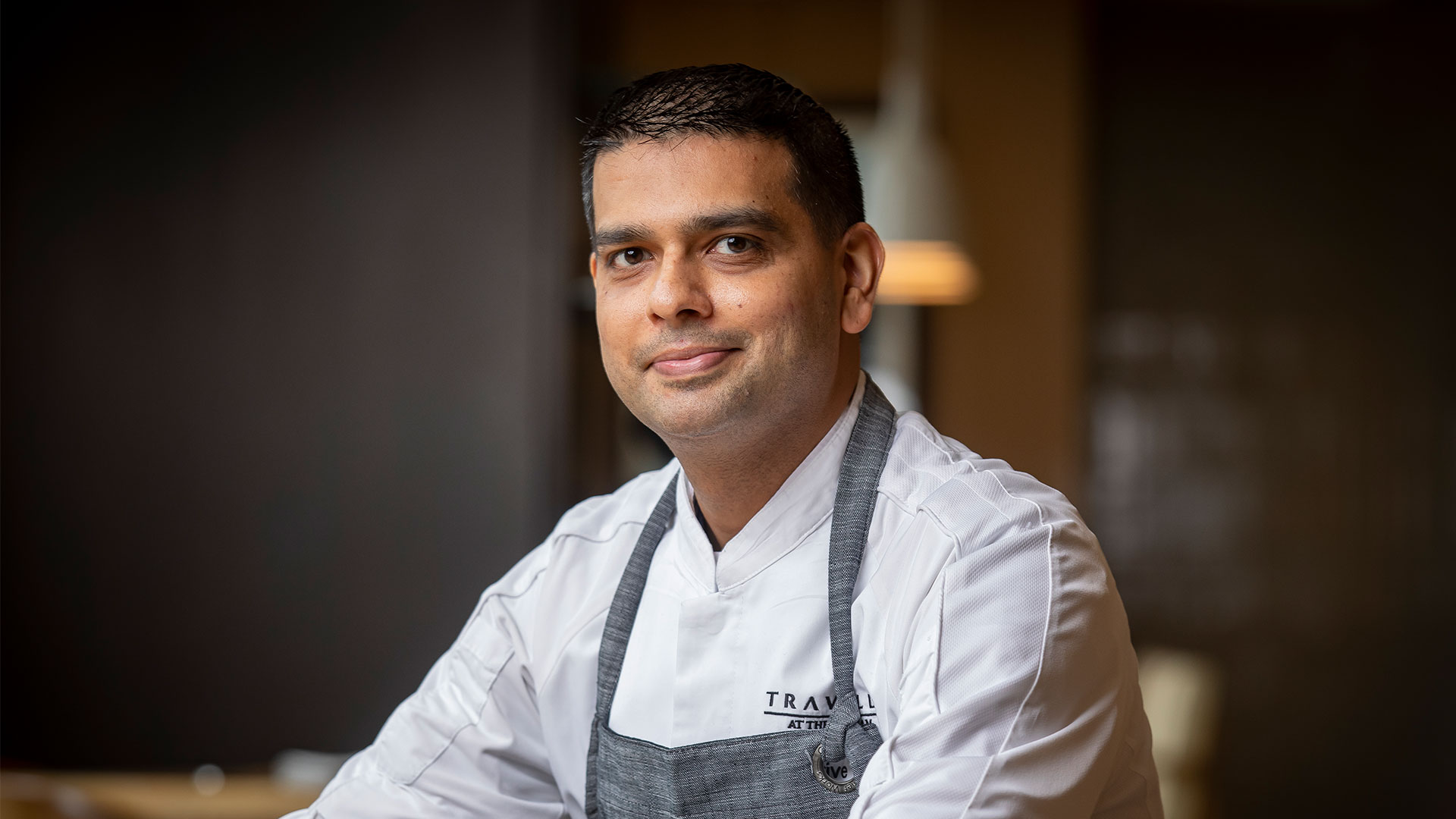 Originally from India, Pastry Chef Nitin Bali grew up in and around the kitchen with his mother. Bali began his schooling in his home country, earning a bachelor’s degree in Hotel & Tourism Management. Upon moving to the United States in 2007, he received a master’s from Herguan University, followed by enrollment in Long Beach City College’s two-year baking and pastry program, where he developed his true culinary passion and realized his innate ingenuity.

Chef Nitin rose through the ranks, spending nearly a decade working for a multitude of Ritz-Carlton Hotel Company properties across the United States and the Middle East. Some of his defining career moments occurred while working at The Ritz-Carlton, Doha where he had the unique opportunity to bake for the royal family of Qatar, and at The Ritz-Carlton, Atlanta, where he used his culinary talents to create a larger-than-life holiday gingerbread “Arch” display for hotel guests.

Following some time spent at Four Seasons Hotels and Resorts and prior to joining the team at Travelle at The Langham, Bali led the pastry kitchen at The Ritz-Carlton, Chicago. He describes his style as seasonal with a modern, classical touch and enjoys incorporating ingredients and flavors from nature into his plated dessert and chocolate showpieces.

“It is an honor to join Travelle at The Langham, and I look forward to bringing my fresh pastry-making approach to one of the most luxurious hotels in the city,” says Bali. “We all look for joy throughout the day, but nothing comes short of having a nice meal in a world-class setting. I am thrilled to contribute to the culinary excellence of this exceptional dining destination and share with guests memorable and delectable experiences through dessert and first-rate service.” 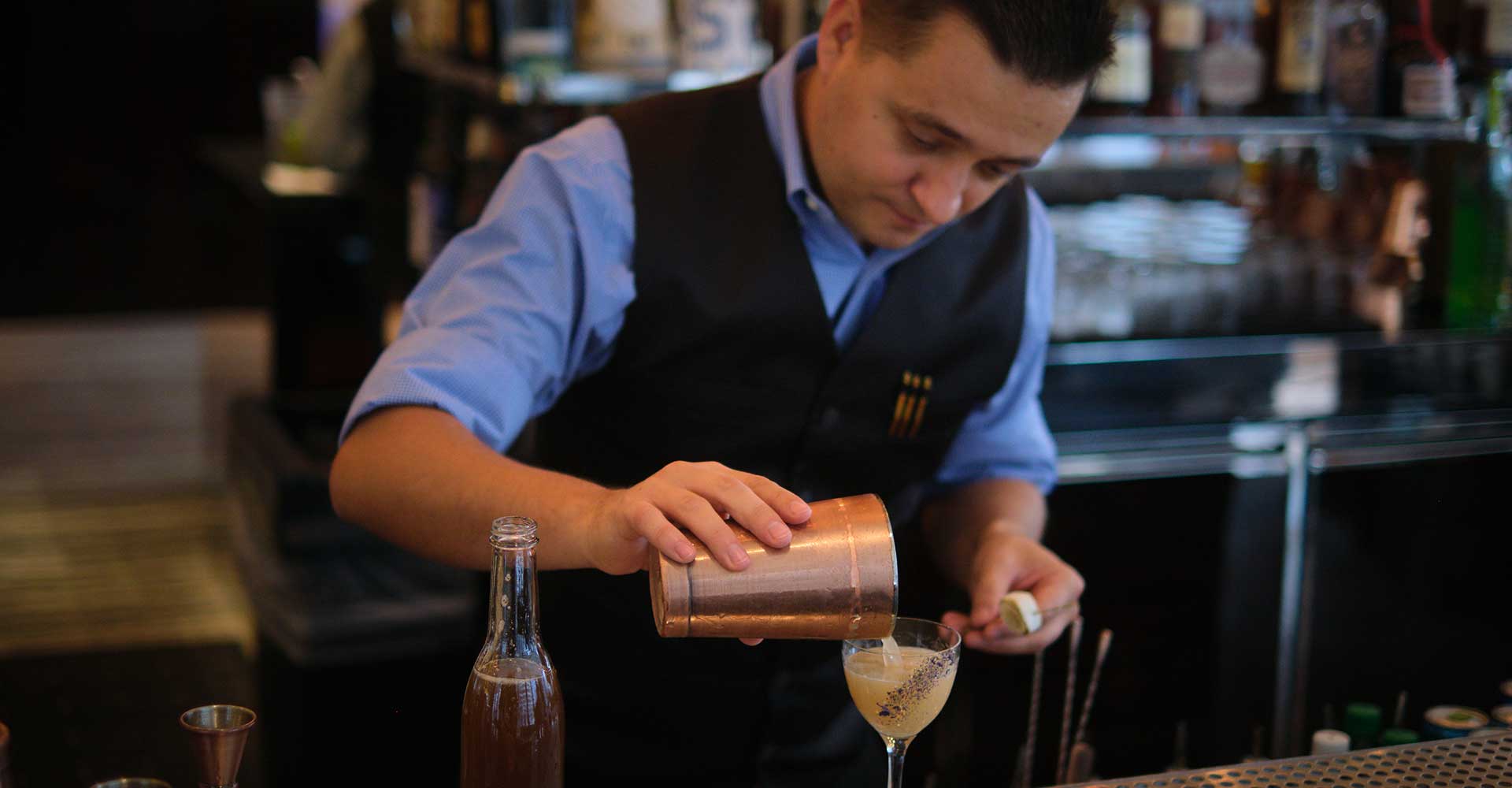 With over 20 years of experience Mixologist, Slava Borisov approaches each craft cocktail as a work of art.

“Our cocktail gallery is interesting and versatile enough to accommodate the uniqueness of all of our guests. Each cocktail has its own legend and inspiration”.

Hailing from Omsk, Siberia, Slava grew up with a diligent outlook shaped by his time in the Russian military. A fortuitous advertisement for the Bartender Association of Russia in Moscow later prompted him to enroll and consider pursuing a mixology career. Slava worked as a bartender at an upscale restaurant between classes and stumbled upon the Tom Cruise movie, “Cocktail.” He realized his path mirrored Cruise’s path to a certain extent—this epiphany, along with his hands-on experience in the food and beverage industry, fueled his passion for becoming a bartender. After earning a professional bartending diploma, among many other certifications in spirits, Slava also received his M.A. in human resources management from Omsk State Technical University in 2010.

In 2011, Borisov’s dream became a reality when he moved to New York to work in Brooklyn’s renowned beverage scene. A few years later, he eventually moved to Chicago—a city that introduced him to the world of luxury hospitality—where he learned how to express his talent and passion for bartending.

Borisov joined The Langham as part of the opening team in 2013. After three years at The Langham, he moved overseas for almost two years. Still, he returned to his Langham family to share his international experiences and transform Travelle’s bar into “the most shining spot in the city – and in the country as well.”

Earlier in Borisov’s budding career, he won several bartending competitions in Siberia, a trajectory that allowed him to treat his so-called “hobby” more seriously and improve himself as a leading professional in the industry. One of Borisov’s defining career moments occurred in 2019 when he competed as a finalist in the Diageo Reserve WORLD CLASS Bartender of the Year. After moving through five rounds, Borisov successfully reached the National Finale in which the top 15 regional winners competed against each other to be crowned the “Best Bartender in the World.” 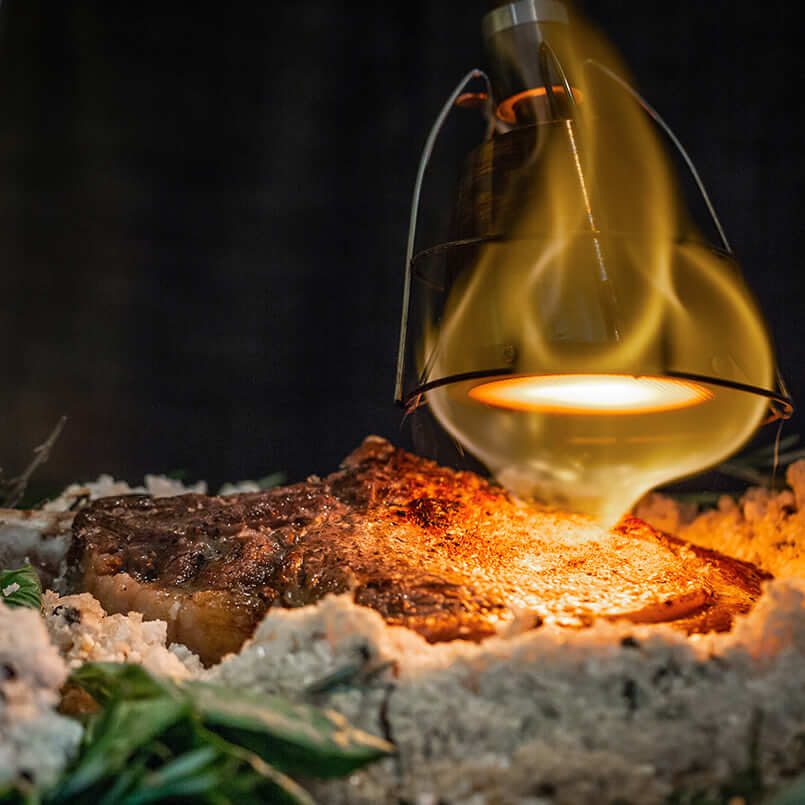 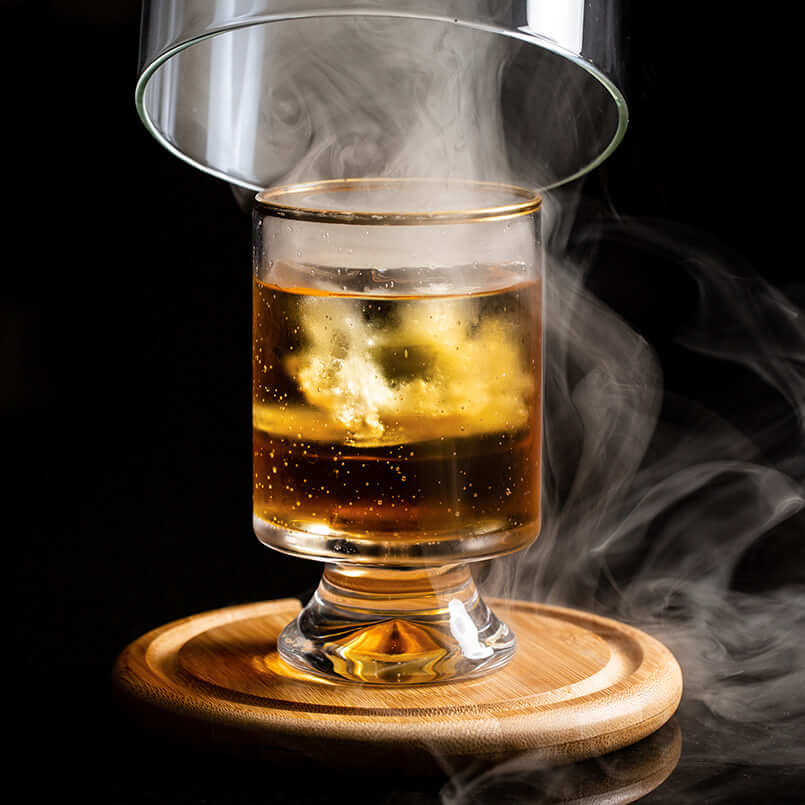